Becoming ‘Aware’ of Your Surroundings Through Modern Technology 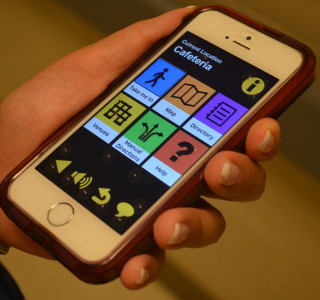 Becoming ‘Aware’ of Your Surroundings Through Modern Technology

Going on my own to unfamiliar places has always been one of my biggest challenges. People with sight can easily scope out an area and figure out where things are, but this is not always the case for someone who can’t see. New assistive technology is being developed that will make it easier for us to navigate independently when out and about. The Aware app, made by Sensible Innovations, is one such technology. We at The Chicago Lighthouse are currently involved in a pilot project testing the app, and I recently got a chance to see how it works!

The Aware App was developed by Sensible Innovations of Springfield, IL. Rasha Said is the company’s founder and CEO, and she was inspired to develop the app by her son, who is legally blind. Said saw her son’s need to know what was around him in unfamiliar places, and realized that millions of individuals worldwide with vision loss could also benefit from the emerging technology.

Using Apple’s iBeacon technology and the Aware iOS or Android mobile app, users get verbal information and directions to different locations in a building. The iBeacons, which are installed throughout different areas of a facility, transmit information via Bluetooth to a user’s phone. The app then announces the places as users approach them. It will also give directions and guide them to different locations.

The Aware app uses information and navigation beacons. Navigation beacons give directions to different places in a building. Users can choose a desired location in the app’s directory (a feature I particularly like,) and once selected, the app will guide the person there. At The Lighthouse, it can give me directions from the lobby to the cafeteria and vice versa. Information beacons give more specific details, such as the description of a room’s layout. When in The Lighthouse lobby, for example, the app announces where the information desk and seating areas are. These beacons can also read things like restaurant menus and items in vending machines.

Beacon information for each building is managed through an online portal. The website, which is also accessible to assistive technology users, allows those in charge of configuring the beacons to add or update information as needed. This can be useful when making a correction or updating the description of a room’s layout, for instance. The portal can be accessed at any time of day, and information can always be updated.

My Thoughts about the App

Aware is fully compatible and accessible with iOS’s voiceover screen-reader. After installing and opening it, the app automatically began searching for beacons around The Chicago Lighthouse. Seconds later, it announced that I was in the lobby. When I hit the “more information button on the upper right of the screen, it told me that the information desk is directly straight ahead from the entrance, and that there are seats all around the lobby. Beacons are also installed in three of The Lighthouse’s vending machines. After tapping the information button when I was near the drinks vending machine, the app read the different items and prices.

This app is an emerging technology that I believe has a lot of potential. It is easy to use, and very accessible to people with varying degrees of vision loss. Directions are clear and easy to understand, and the app constantly announces the areas users are approaching. This is of tremendous help for orientation purposes. I hope that one day more places will adopt this remarkable technology so that people with vision loss have the freedom to venture out and explore at their heart’s content. Kudos to Rasha Said and the entire Sensible Innovations team for their hard work. The possibilities for this technology are endless! 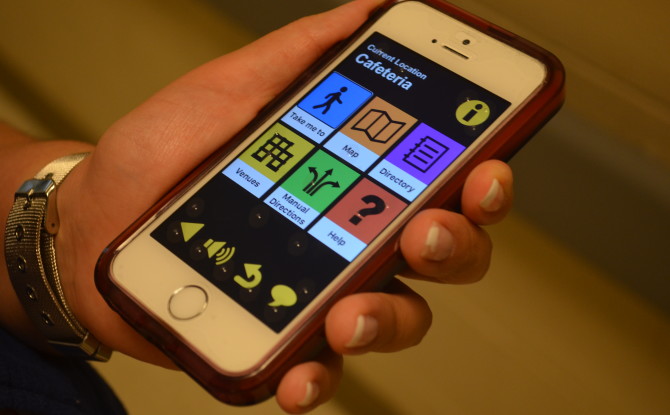