Get your feet tappin’ and your hands clappin’ with this amazing line up of talent.  Come out to Navy Pier to see over 12 performances spotlighting the city’s best talent with and without disabilities together on stage!

Special Guest, Avett Ray, a seven year old piano prodigy and  YouTube sensation who is visually impaired and appeared on national TV including American Idol. Emceeing the event is Chicago’s own Leon Rogers of WGCI! 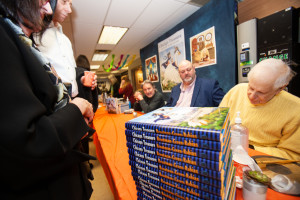 Award-winning author Larry Broutman, who has written a highly imaginative new children’s book celebrating inclusion, will be selling and signing copies during The Chicago Lighthouse’s Center Stage concert at Navy Pier on Saturday, Sept 14, from 11 am to 2 pm.

Featuring dozens of stunning images of children, many with disabilities, posing as their favorite nursery rhyme and fairy tale characters, “Chicago Treasure” sends a powerful message about the power and beauty of access and inclusion.

“By highlighting children with disabilities as Cinderella, Snow White, Old King Cole and other characters, without calling them out for their disability, Larry is showing us the very essence of inclusion,” said co-author and principal illustrator Rich Green.

The book has received favorable reviews across the country and has been profiled on Windy City Live, WGN-TV, Chicago Parent, WGN Radio and many other outlets.