Guest Commentary: Fake Service Animals Are Not the Problem 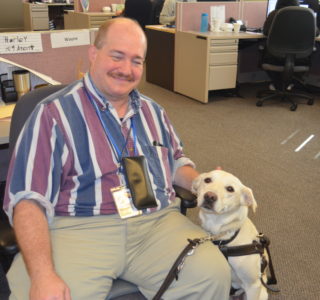 Guest Commentary: Fake Service Animals Are Not the Problem

The topic of fake, or ‘phony’ service dogs is commonly discussed among service animal users, and we have previously covered it in the Sandy’s View Blog. This week, Wayne Scace, a service dog user, shares his point of view on the issue.

This is in response to the Fake Service Dogs post previously published in Sandy’s View. First of all, there isn’t a problem with ‘fake service dogs’, there is, however, a problem with non-disabled individuals faking a disability to claim rights or privileges that are not due them. Next, I would like to address the statement in the post regarding the ease of acquiring service animal equipment. I say that this ease of acquiring Service Animal gear is a good thing, and for great reasons. Restricting access to the equipment WON’T stop someone from committing the fraud of faking a disability, but it WILL have the nasty side effect of making life even more difficult for disabled citizens that have a legitimate need for service animal related equipment.

Some people who received their service animal from dog guide schools choose to purchase additional leashes and harnesses to supplement the equipment they received with their dog. Most guide dog schools in the U.S. provide leather harnesses (to my knowledge, Gallant Hearts in Mississippi is the only guide dog school that issues harnesses made from nylon webbing), so some guide dog owners buy a nylon harness to use at the beach, or in the woods because it is very easy to wash if it gets soiled. Another reason is to try out a different style of harness – a Y front as opposed to the more traditional straight front harness. For individuals who choose to train their service animal, buying their equipment is not just a handy option, but it is a necessity.

Allow me to repeat this, restricting access to service animal equipment is not a solution to the problem of people that commit the fraud of faking a disability, only to gain rights and privileges that they are not due. Educating the public and businesses about service animals and the ADA would be a more constructive way to help reduce the scourge of people faking disabilities. If a dog isn’t housebroken or out of control, an establishment can ask that it be removed and the owner may then re-enter the establishment. This applies to any dog, even a fully trained service animal.

Wal-Mart is a prime example of an establishment that doesn’t use the rights granted them under the ADA, because it forbids their employees from asking customers the two legally allowed questions (1. is that a Service Animal? and (2.) what work, or task(s) has the dog been trained to perform to mitigate your disability? This can make shopping at Wal-Mart chaotic for legitimate service animal teams.

I’ve personally experienced this backlash at Wal-Mart years ago, when I realized an employee was following us around. Needing some assistance finding something, I asked the gentleman for help. As he assisted me, I asked him why he was following us, and he told me that earlier that day, someone had brought in a badly behaved, or as he put it, ‘yappy’ dog that barked, growled, and urinated in the housewares section. He had been assigned to follow us to make sure my dog did not do the same. When I attempted to educate the employee about the two legally allowed questions, he politely thanked me for the information, and stated that Wal-Mart’s policy only allowed him to ask the first question.

The way I see it, is this: The problem of people faking a disability to receive rights and privileges that aren’t due them isn’t going to go away by restricting access to equipment. Enacting a law in Illinois that criminalizes faking a disability, as Florida has done, would, in my humble opinion, be more efficacious at combating the faker problem.

Do you have comments or questions about this or other topics? Please leave us a comment, or send an email to sandysview@chicagolighthouse.org. 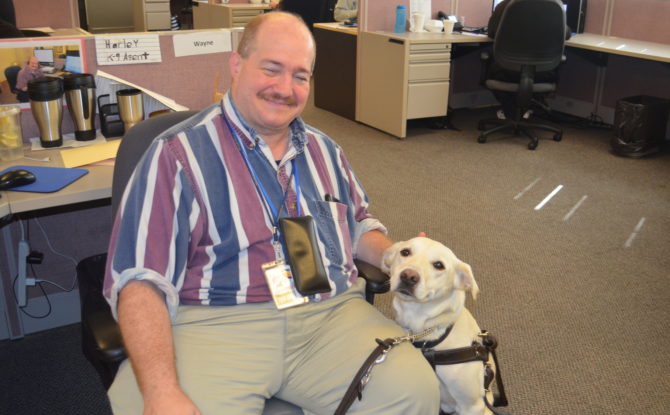