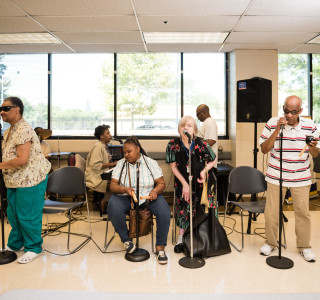 Blind bandmates say performing live is out of sight

The room was rocking to the 1960s dance song “Twine Time.” The keyboards were layering on the chords, the drums were pounding, and people were standing in front and dancing.

“Lookin’ good up there, graduates!” vocalist Margoline Martin called out.

But Martin couldn’t actually see how they were looking, and neither could any of the other musicians. They are members of VisionQuest, a band of musicians who are blind and cognitively disabled.

Think of it as the house band of the Chicago Lighthouse. The agency for the blind and visually impaired created VisionQuest as an activity for clients in 1971, and has been running the band and sending it out on gigs ever since.

VisionQuest plays ’50s and ’60s standards, rhythm and blues, and gospel. At a show this month, for a graduation at the Illinois Center for Rehabilitation and Education’s facility on Wood Street in Chicago, the band’s set included “Secret Agent Man.” Tall and dapper Carl Crawford, wearing a dark brown sweater and dark glasses, sang lead.

VisionQuest’s sound is rich — four vocalists in tight harmony, three people on keyboard, one on the drums and another playing congas.

Several band members, who range in age from 37 to 65, have been playing for years. Silas Gwin began playing the piano when he was 3. He reads Braille music and plays keyboard at his church.

Admission to the band is by audition. Blind people from outside the Lighthouse sometimes call to ask for one.

Not everyone passes. The band’s director for the last three years, Victoria Johnson-Gore, is unapologetic about her expectations: Band members must have skill and experience.

“You have to know what you’re doing,” said Johnson-Gore, who herself is blind but not cognitively disabled and who has written more than 75 songs and is producing her own gospel CD. She also plays keyboard and sings with the group.

She wants to expand VisionQuest’s audience beyond the disability-related events where they usually perform.

“The sighted world needs to see them now,” she said.

However, budget cuts have made booking the band more challenging.

By design, playing in the band is a paid job. “Our philosophy is that what they’re doing is worth something, and they by extension should be paid something,” Mantsh said.

Whoever books VisionQuest must pay the musicians union scale. But “a lot of the events where we play annually have been slashed because of budget cuts,” Mantsh said. “And a lot of new things we’re pursuing are not open to us because of their budget constraints.”

Nonetheless, VisionQuest still performs regularly. At this recent show, the band not only provided music but musical punctuation for speakers’ remarks.

Mary Jo Wenzlaff, playing a keyboard labeled in Braille, expertly added a few descending notes at the exactly right spot at the end of a joke.

“I like to make the organ laugh,” she explained later.

The shows are highly satisfying for band members. Being blind doesn’t matter when you’re playing music, said Jan Turner, who plays the congas. “We can do that real good by ear.”

“I like to show my talents that God gave me,” said drummer Allen Graham, whose father taught him to play the drums when he was 5. And audiences are appreciative. “Sometimes we get standing ovations.”

For some, performing in public was initially intimidating.

“The first time I went onstage, I couldn’t sing a note,” said vocalist Cheryl Tillery, whose only vocal experience before joining the band seven years ago was singing along to Eagles and Christopher Cross records. “But the second time, I was surprised at how well I did. People applauded.”

The band rehearses at the Lighthouse on Chicago’s Near West Side five days a week, twice a day before shows. Lighthouse staffers sometimes complain about the volume, to Johnson-Gore’s annoyance.

And a band needs a crew. For VisionQuest, Mantsh has organized several crews of Lighthouse clients, who make use of the Braille he has affixed to amplifiers and cables.

“I’m teaching them how to be roadies,” he said. 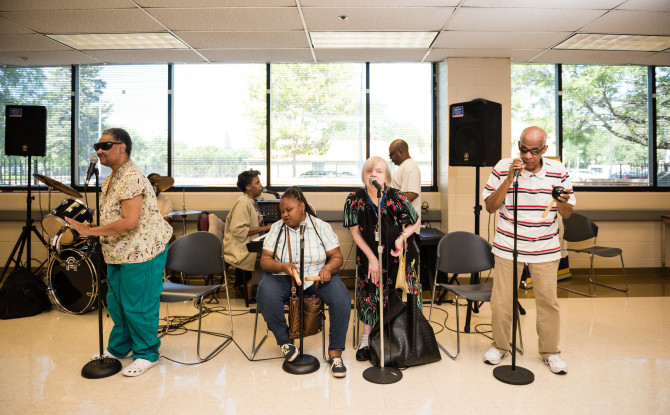