The Chicago Lighthouse mourns the loss of Board Member Larry Broutman, whose one-of-a-kind Chicago combination of brilliance, compassion, and artistic talent was a source of joy for everyone he encountered.

Through his five years on The Chicago Lighthouse’s Board, Mr. Broutman championed access and inclusion in support of a more empathetic world.  He cemented that passion with the publication of his book, Chicago Treasure, earlier this year. Born out of a dream Broutman had one night, the book features children, both disabled and non-disabled (some of whom were enrolled in the Judy & Ray McCaskey Preschool Program), as lead characters in their favorite fairy tales and stories. 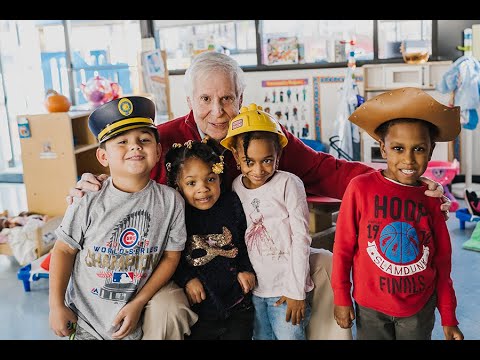 Larry had deep compassion for our children and championed inclusion for people with disabilities as shown in this video and his book, Chicago Treasure.

“The book celebrates access and inclusion, and it doesn’t distinguish between children with a disability and those without disabilities,” Mr. Broutman once said of the book. “They’re all the same, and they’re all Chicago’s treasures.”

Chicago Treasure was a crowning achievement for Mr. Broutman, who was recognized earlier this year as an “Outstanding Chicagoan” by the Chicago City Council, who also named September 21 “Chicago Treasure Day.” With the proclamation, the council praised Broutman’s commitment to the “power and beauty of access and inclusion.”

“There are no limits to the benefits of inclusion,” Mr. Broutman used to say. “The more we can realize that, the more we can make the world a more compassionate and accepting place.”

A pioneer in the field of plastics and composite materials, Mr. Broutman’s interest in photography dovetailed with a passion for travel. Mr. Broutman’s many treks to Africa with his wife, Susanne, resulted in the publication this fall of African Treasure (co-authored with Peter Liech). Spanning nearly 300 pages, African Treasure showcases Broutman’s passion for Africa’s diverse culture and wildlife through stunning photography.

A tireless champion of the underserved, Mr. Broutman generously donated a portion of the proceeds from the sale of his five books to The Chicago Lighthouse and Access Living, two organizations that reflect Mr. Broutman’s compassion and passion for an empathetic, inclusive world.

“It was an honor and privilege to have known Larry. He brightened The Chicago Lighthouse with his rare combination of generosity, kindness, and compassion for all,” said Chicago Lighthouse President and CEO Dr. Janet P. Szlyk, Ph.D. “Our light shines a little bit dimmer without him.”

Below is a link to his obituary to learn more about this amazing man: https://www.legacy.com/obituaries/name/lawrence-broutman-obituary?pid=194661605&affiliateid=1064