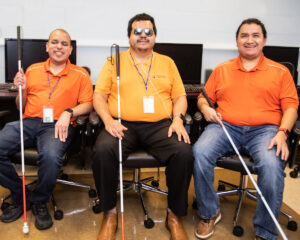 In 2018, the University of Illinois Hospital and Health & Health Sciences System opted to adopt Epic to handle its scheduling services. The switch would provide better communication and access among UI Health’s various medical departments, saving countless hours for both patients and staff. There was only one small issue: the software was not fully accessible across its scheduling workflow for users who were blind or visually impaired.

As a longtime client and partner of The Chicago Lighthouse’s social enterprise call centers, full accessibility for users who are blind was critical to UI Health. “This is a partnership,” says Kay Soto, retired Director of UI Health Call Centers who helped to set up the call centers at The Lighthouse. “We have something special here.”
The solution came in the form of another Lighthouse offering, the Digital Accessible Experience consultancy (DAX). Launched in 2019, DAX employs accessibility-certified IT professionals, who are blind, to help companies and other organizations ensure their digital interfaces are optimized for people with visual impairments.

For DAX, accessibility works best when it is incorporated in the design stage (rather than laid on as retrofitted patches). The DAX team worked side-by-side with Epic software developers and implementers shadowing call center employees to determine how to optimize the product’s workflows for The Lighthouse’s employees with visual impairments. Among the changes were adding headings to fields for clearer navigation, integrating keyboard shortcuts, and removing unnecessary menu items.

After extensive testing by DAX and other Lighthouse staff members, Epic’s accessible-optimized software launched last year, immediately opening up opportunities for people who are blind or visually impaired. Since its launch with UI Health, employees with visual impairments have scheduled more than 2,000 appointments, and 30 call center employees have been promoted to “Medical Scheduler.”

DAX’s work with UI Health and Epic, which will open up opportunities for people with visual impairments around the world, demonstrates how The Lighthouse’s programs work together to improve the lives of everyone involved. “Our call center agents now have workstations that grant them equal access as their sighted peers,” says DAX Lead Analyst Jose Martinez. “Every time a colleague changes their title to ‘Medical Scheduler,’ it makes my day. We made that happen!”