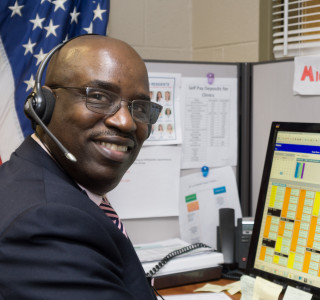 He joined the U.S. Navy and had a chance to see the world. He has a strong interest in film and broadcasting. He also enjoys bowling and cross-country running. Most importantly, he derives his greatest satisfaction from helping others.

Meet Michael Smith, a U.S. Navy Veteran who attained the rank of Second Class Petty Officer and who is a recent addition to the team at the UI Health Customer Service Call Center here at The Chicago Lighthouse.

“I heard about the job while attending a Veteran’s fair last winter,” Smith recalled. “I have been a long-time admirer of the work The Lighthouse does for people with disabilities so this just seemed like a perfect fit!”

A Detroit native who studied at San Jose City College in California, he says his life has been guided by four main principles: Be impeccable in your speech; don’t take anything personal; don’t assume anything; and, always do your best.

Asked what he likes most about his job as a call center agent, Smith flashes a broad smile and says: “I just love to help people with their problems. If someone needs to get in touch with a doctor, for example, and I help make that happen, I can take pride in that.”

Along the way, he has developed a strong empathy for people with disabilities.

“As someone who was homeless when I was younger, I’ve had first hand experience in dealing with adversity.”

Smith added that in America, we seem to have an appreciation for individuals who are disabled and welcome their contributions to our society.

For his immediate goals, he hopes to excel at his job in the call center and perhaps pen a screenplay on his experiences.

“I’ve been fortunate to have come into contact with so many wonderful people. I only hope that I could do justice to their remarkable stories!”