ABC 7 Chicago was among the city’s major news outlets to cover today’s press conference held at The Chicago Lighthouse by Mayor Lori Lightfoot on her administration’s plans to increase audible pedestrian traffic signals at intersections across Chicago.  The signals are especially designed to better accommodate individuals who are blind or visually impaired.  Mayor Lightfoot announced that up to 100 intersections across the city will get new traffic signals in the next two years that more effectively communicate the “walk” and “don’t walk” intervals for people who are blind or have low vision.  The announcement coincided with the 29th anniversary of the signing of the Americans with Disabilities Act.  She received a warm welcome from Lighthouse President and CEO Dr. Janet Szlyk who saluted the Mayor and her predecessors along with Commissioner Karen Tamley for making Chicago one of the most disability-friendly cities in the world.  Speakers also included Greg Polman, senior vice president of public policy at The Lighthouse who serves on a city transportation committee which recommended expansion of the signals to ensure the safety of pedestrians who are visually impaired. 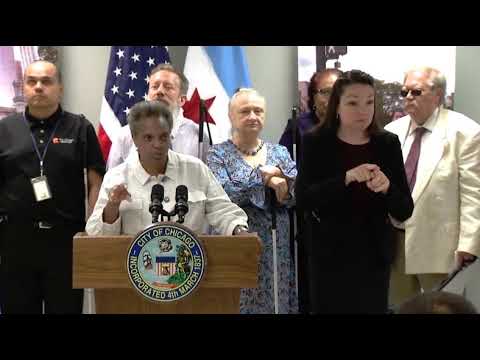