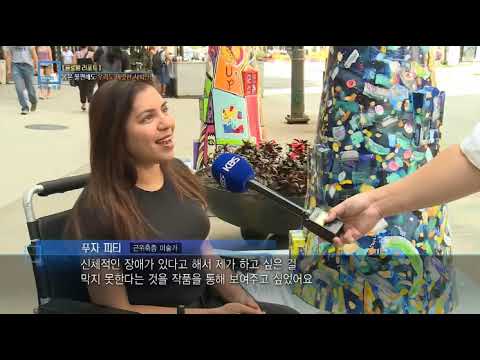 Even though the event ended August 11, our Lighthouses on The Mag Mile Public Art Display continues to generate international buzz!  Recently, South Korea’s top news channel, KBS, aired a segment on its Global Report.  Our message of access and inclusion is universal and knows no boundaries!

While the segment is done in Korean, the visuals of the lighthouse sculptures are stunning and interviews with key players like Lighthouse President/CEO Dr. Janet Szlyk are conducted in English.

Below is an English translation of the segment, courtesy of Bae K. Rhee, news coordinator of KBS’ New York bureau.

[Global Report] Even though we are disabled but we are part of the Society.

In the United States, one out of five people have a disability.

There are so many people with disabilities throughout society.

Although the body is somewhat uncomfortable, a ‘customized system’ is well established here in US enabling people with  disabilities to live and contribute within their society.

Kim Chul-woo is reporting on the “Stand Alone System” in the United States for the people with disabilities.

Chicago is famous for its well-organized urban design in the United States.

The lighthouse is in full swing in the middle of the city.

The pattern of the blue waves.

And also a lighthouse with red flowers that are expressed in dimensions.

When the lighthouse, which can be found on the beach appears in the middle of the busy city that attracts people’s attention.

[Asalie / Canadian Tourists: “It’s nice , It looks beautiful. Actually it catches my eyes and why is it here.”]

This is Chicago’s famous shopping district.

The lighthouse with beautiful colors and texture shines the light of hope to 800,000 people who visit here every day.

However, the people who designed the lighthouse are not ordinary artists.

Carlos and Maria have visual impairment.

For three months using colored cloth, they showed their expression on the texture of their lighthouse piece.

[Maria: “It  was very relaxing. I felt at peace when I worked.”]

Pooja Pittie, who has been suffering from muscle weakness since she move to the United States 20 years ago, is happiest when she is working on her art projects.

[ Pooja Pittie : “I wanted to show that just because you have disability does not prevent you from doing everything that you want in life.”]

There is also a piece where people are blind folded and paint the lighthouse.

[Loretta / Chicago Citizens: “Just because somebody has a disability does not make them any less or any more. I’ll just say get along and bring awareness to it.”]

Some artists can not see their own works because of their disability, but they offer special services to the audience.

The mobile application provides information about the artist and their work.

This is the voice of the artist who created this lighthouse.

A lighthouse exhibition was organized by a non-profit organization to inform the world about the potentials of people with disabilities.

Founded more than 110 years ago, this organization provide education, counseling and support for people with visual impairments.

[Janet Szlyk / Chicago Lighthouse President: “And employment of people who are disable.”]

Currently, they run watch factory in the United States.

75% of people working in design and manufacturing are disabled.

[Mary / Watch Factory Employee: “Make us feel better that we can do something for other people that we can make product they want.”]

They also have radio studio to broadcasts information on the interests of people with disabilities and various living information.

[Brad / Producer: “The life of Blind person, How it differs from somebody with sight to somebody without sight.”]

[Sandy / Show Host: “You know I certainly try to give hope to other people. First of all educate you know even the general public.”]

There are many cases where disabled people make profits from work and play huge role as workers.

A coffee shop that opened two years ago in Wilmington, North Carolina, has become a local attraction.

Wright’s family has two children with autism hoping to create workplace where their children could work.

[Amy Wright: “People with intellectual disabilities aren’t valued so this coffee shop created a place for people to see their value.”]

Started with 15 employees with Down Syndrome has increased to 60.

The coffee and bread taste is excellent, but the smile of the people with Down Syndrome is a charm that makes customers to visit every day.

Socks designed by young man with Down syndrome becoming a hot topics.

The 21-year-old John Cronin has used cartoon characters, politicians, and other objects as design material.

[Mark Cronin / John’s father: “When you give someone a chance, we want to show the world what people with intellectual disability can do.”]

The company has sold over 1,200 kinds of socks for over two years and earned more than 3 billion won.

The company donates 5% of its sales revenue to Paralympic and 11 disabled organizations.

There are disabled people around us who can not go to work because of their disabilities.

It is because of prejudice and discrimination prevalent in our society.

It would be a form of embracing society that we are aiming for so that everyone can enjoy without having to give up ordinary life.