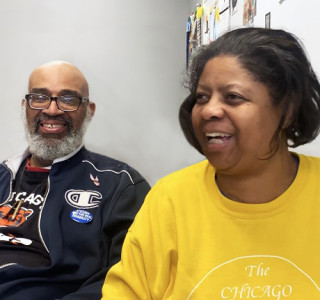 It’s a typical Tuesday in February in The Chicago Lighthouse cafeteria. As Seniors gather before the week’s coffee club session, they all say the same thing with exuberance: “I hear you, Steve!”

Steve is a regular attendee of The Lighthouse’s Seniors Program, which he attends with his wife, Loretta. The couple, who have been married since 2012, is the center of attention as Loretta distributes her handmade bracelets and jewelry.

“I learned to make the jewelry at crafting class in our Seniors Program,” Loretta says. “I took it on and ran with it.”

Steve and Loretta have been coming to the Seniors Program for five years. Steve, who once had a detached retina but still has much of his vision, sees himself as Loretta’s guide and escort through the Program. But it’s clear from his interactions with the others that he is getting as much out of the Program’s offerings as Loretta does.

Steve and Loretta were set up by a colleague at the Black Star Project, where Steve was a motivational speaker, and Loretta was a receptionist. “Everyone’s had a blind date, but not everyone has had a date that was blind,” Steve jokes.

Eight years into marriage, Steve and Loretta still radiate their affinity for each other. They playfully tease each other, and one is often reaching for the other’s hand for a gentle squeeze. They’ve even learned to accommodate each other’s entertainment quirks; Loretta knows to leave Steve alone when he’s watching football, and Steve is content to sit back when Loretta listens to her audiobooks. And they both truly enjoy their time at The Chicago Lighthouse.

“It gives us something to do that’s away from the chores of the house,” Steve says. “And I’m glad to bring a smile to so many faces in the program.” 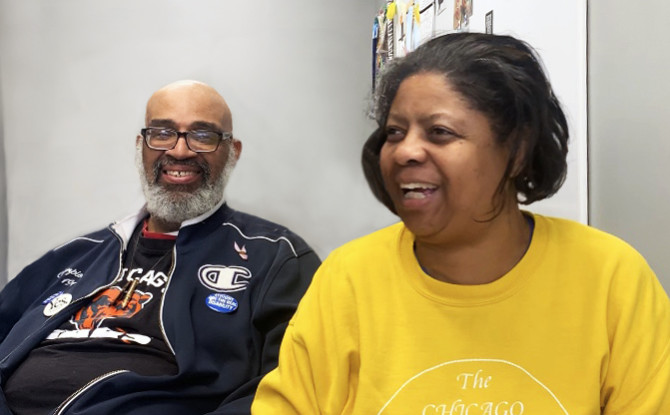